This is where we keep you informed about all the latest news and developments at Charnwood Genealogy. 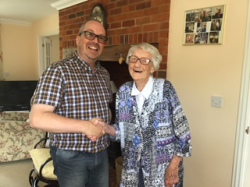 Some lovely feedback and a photograph received from clients this week:

“Joan and I have enjoyed working with Simon while he researched our family history.  He produced several detailed folders for us and took time to go through and explain everything with us.  He kept in touch regularly and was willing to answer any follow up questions we had.  The service he provided was exceptional value at an affordable cost.  He showed a genuine interest in our family and it has been a pleasure working with him.”

The Aldeburgh War Memorial book – The Story Behind The Names 1914-1918 - copies are £10.00 each from the Aldeburgh bookshop, Amazone, eBay or can be obtained directly from myself at charnwoodresearch@virginmedia.com

‘The Men Behind The Names’
- World War 2

The book has been written following on from my World War 1 book launched in November 2011 to commemorate the 90th anniversary of the erection of the War Memorial in Framlingham and contains information about the World War 2 names listed and also the stories of everyday life in Framlingham and the surrounding villages during the War and the impact that it had on the town. All profits from the sale of the book are being donated to the Royal British Legion.

Copies of
the book are available at £5.00 plus P & P by contacting us by email at charnwoodresearch@virginmedia.com 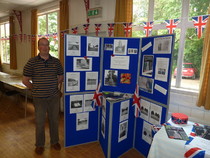 Charnwood Genealogy was involved with the Diamond Jubille history and photgraphic exhibition in Framlingham in Suffolk and this provided a great opportunity to promote our services and to make new contacts.

We were also able to speak to local people who had information about some of the World War 2 names on the Framlingham War Memorial, which we are gathering to feature in our second book due to be launched later this year.

The East Anglian Daily Times Newspaper has also featured an article about this research and this can be seen by following the link below:

FRAMLINGHAM WAR MEMORIAL - 'THE MEN BEHIND THE NAMES'

This book commemorates the men of Framlingham whose names are on the Town War Memorial who lost their lives in the First World War ( 1914-1918).

The opening chapters focus on the start of the War and the recruiting of men to go off to fight for their Country.

The main section of the book is concerned with the men behind the names. Starting with their early lives before the war it goes on to describe where they lived, their families, where they died and their place of burial or commemoration.

The final chapters describe the erection of the War Memorial, the subscribers to it and the unveiling ceremony in 1921, with 2011 being the 90th anniversary year.

Copies are available at £5.00 each plus P&P by contacting us - all profits from the book sales are being donated to The Royal British Legion.

The ‘Men Behind The Names’ on Framlingham War Memorial

Following the book launch in November 2011 I would like to thank everyone for their support and to date 200 copies have been sold and £500 raised for the Royal British Legion through the sales, which I am really grateful for.

After an article appeared in the East Anglian Daily Times about the book launch I was contacted by a lady in Chelmsford, whose 96 year old mother Ruby is the daughter of Reuben Meadows who is featured in the book. Ruby Meadows was born 12 days before her father was killed in the Battle of the Somme in 1916 so she never knew him. Unfortunately Reuben’s brother Ernest Meadows and his brother in law Walter Thompson (married to his sister Ellen Meadows) were also killed, so Ruby’s Grandmother lost three members of her family in World War 1.

I met up with Ruby recently in Martlesham where she lives to talk about my research and she said that the book had brought back many memories to her of her early life in Framlingham and she had really enjoyed seeing all the old photographs. She is hoping to make a visit back to Framlingham soon with her daughter to see all the familiar landmarks.

I will shortly be starting work on my book about the World War 2 names shown on the War Memorial and I would thank those people that have already made contact with me, however I am still very keen to hear from any other relatives of the men named and also anyone who would be willing to share their memories and photographs of everyday life in World War 2 Framlingham.

You can reach us on:

Or you are welcome to use our contact form.

Promote Your Page Too

Guild of One Name Studies - www.one-name.org

The Society of Genealogists - www.sog.org.uk

Association of Genealogists and Researchers in Archives - www.agra.org.uk